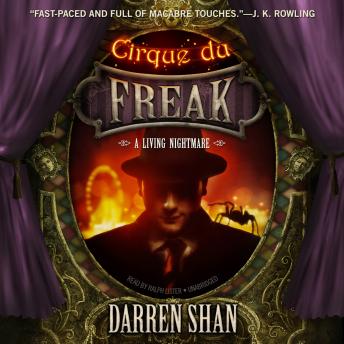 In the tradition of Ray Bradbury’s Something Wicked This Way Comes, and Stephen King’s Salem’s Lot, New York Times bestseller Cirque du Freak is the first title in the popular Saga of Darren Shan.
Darren Shan and his best friend, Steve, get tickets to theCirque du Freak, a wonderfully gothic freak show featuring weird, frighteninghalf human / half animals who interact terrifyingly with the audience. In themidst of the excitement, true terror raises its head when Steve recognizes thatone of the performers-Mr. Crepsley-is a vampire!
Steve confronts the vampire after the show finishes-but hismotives are surprising! In the shadows of a crumbling theater, a horrifiedDarren eavesdrops on his friend and the vampire, and is witness to a monstrous,disturbing plea. As if by destiny, Darren is pulled to Mr. Crepsley, and whatfollows is his horrifying descent into the dark and bloody world of vampires.
This is Darren’s story.