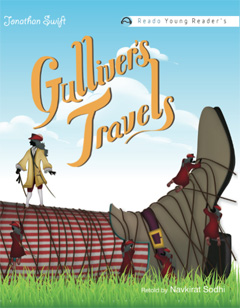 Part I : A Voyage to Lilliput and Blefuscu – Gulliver enjoys traveling, although it is this love of travel that is his downfall. His adventure sets off in Lilliput, when after a shipwreck, he wakes up, finding himself a prisoner of a race of people one – twelfth the size of normal human beings. However, his adventure among the small people does not last long, when he has to escape the city as he is charged with treason. Part II: A Voyage to Brobdingnag – This time around Gulliver finds himself in the land of the giants, and he is one – twelfth their size. The people of Brobdingnag, find Gulliver amusing, as he is really small as compared to them, and exhibit Gulliver for money. However, Gulliver soon finds himself in the middle of the sea again, when a giant eagle seizes him and drops him right into the sea where he is picked up by some sailors. Part III: A Voyage to Laputa, Balnibarbi, Luggnagg, Glubbdubdrib, and Japan – After Gulliver’s ship is attacked by pirates, he is marooned close to a desolate rocky island, near India. Fortunately he is rescued by the flying island of Laputa, a kingdom devoted to the arts of music and mathematics but unable to use them for practical ends. Gulliver is then taken to Balnibarbi to await a Dutch trader who can take him on to Japan. While waiting for passage, Gulliver takes a short side-trip to the island of Glubbdubdrib, where he visits a magician’s dwelling and discusses history with the ghosts of historical figures. When Gulliver finally returns home, he is determined to stay there for the rest of his days. Part IV: A Voyage to the Country of the Houyhnhnms – Despite his earlier intention of remaining at home, Gulliver returns to the sea as the captain of a merchantman. However, as expected he lands himself into trouble, and he comes first upon a race of (apparently) hideous deformed and savage humanoid creatures called Yahoos, who are ruled by a race of horses called Houyhnhms. Gulliver comes to both admire and emulate the Houyhnhnms and their lifestyle. However, an Assembly of the Houyhnhnms rules that Gulliver essentially, a Yahoo with some semblance of reason, is a danger to their civilization, and expels him. He is then rescued by a Portuguese ship, and returned to England for good.