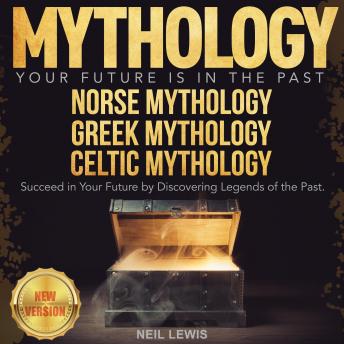 Experience the incredible stories of long-gone civilizations and their world-changing Mythologies today and in the future.From the halls of Viking warriors to the mighty Parthenon and the deep forests and valleys of early Europe, history is filled with a vast array of rich Mythologies, amazing tales, impossible heroes, and fearsome monsters.

Now, this incredible collection sheds light on 3 Mythologies – Norse Mythology, Greek Mythology, and Celtic Mythology – taking you on a journey into the past and unveiling these vibrant legends like never before. From tales of war, bloodshed and trickery to humor, passion and love, you’ll explore the war-like Gods and Goddesses of the Norse people in the halls of Valhalla, the bickering, short-tempered deities who ruled from atop their kingdom on Mount Olympus, and the Celtic tales told around the fire about magic, druids, giants and fairies.

Covering everything from the enthralling feats of Heracles and Odysseus to the terrifying beasts that stalked the nine Norse realms, you’ll also uncover colorful tales from early Ireland, Britain, France and Wales about forbidden love, royal courts, and quests to strange and far-flung lands. Told in gripping detail and delving into the secrets of Mythology, this audiobook unveils the classic stories that have inspired artists and storytellers for millennia.

Explore the past and the world-changing Mythologies of ancient people, letting them inspire you, motivate you, and give you a glimpse into the compelling and exciting nature of humanity, spirituality, and ancient culture.

Scroll up and buy now to unearth the incredible stories of ages past to build a stable future!