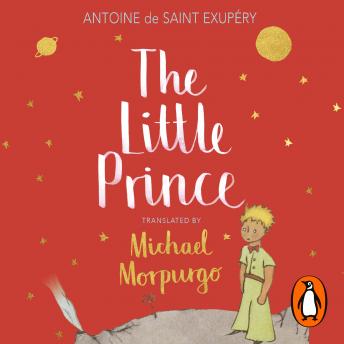 Brought to you by Penguin.

Read by Richard E. Grant, with an introduction read by Michael Morpurgo.

If a little fellow comes along, if he laughs, if he has golden hair, and if he never answers questions, then you will know who he is.

He is the Little Prince, the mysterious, innocent and beautiful boy who appears to a pilot stranded in the desert and makes an extraordinary request. He has captured the hearts of millions of readers around the world since his story first appeared in 1943, written down by an aristocratic French aviator who soon after disappeared during a flight across the sea. The Little Prince journeys to our planet from his home among the stars, encountering all sorts of benighted grown-ups along the way, and a fox, who teaches him how to see the important things in life. But the Prince has left behind a flower growing on his star, a rose which is his treasure and his burden, and before long he must return to it.

Master storyteller Michael Morpurgo, author of War Horse, has translated what is for him ‘one of the greatest stories ever written’ so that more English readers might discover the joy of reading this enchanting fable. The Little Prince is a story for everyone, for children and grown-up children, for kings, geographers and lamp-lighters, even for the very serious and the very wise.