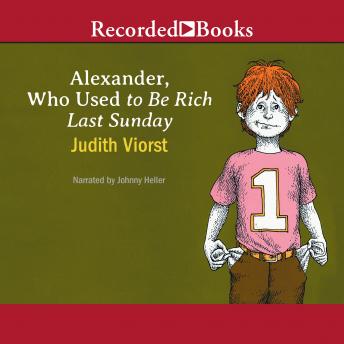 Download Alexander, Who Used to Be Rich Last Sunday By Judith Viorst Audiobook

Alexander, Who Used to Be Rich Last Sunday By Judith Viorst Audiobook

Alexander’s two brothers have money in their pockets. All he has are bus tokens. It isn’t fair. He had money last Sunday when his grandparents gave them each a dollar. Now it’s all gone. At first he was saving the money for a walkie-talkie. But saving money is hard. He bought gum with some of the money, but when it stopped tasting good, he had to buy more. Good-bye 15 cents. Then Eddie offered to rent him his snake for an hour, and he couldn’t pass up a chance like that. Betting his brother that he could hold his breath while he counted to 300 wasn’t a good idea, either. He’ll never own that walkie-talkie! Judith Viorst has a gift for getting inside a little boy’s head and making sense of what goes on there. Paired with Johnny Heller’s acting talent, the result is a good chuckle, laced with real compassion, for the child in everyone.