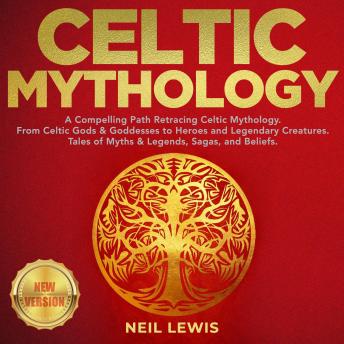 Explore the Legendary Mythos and Fantastical Stories of one of the World’s Oldest Mythologies, Celtic!The ancient, mysterious Celtic people left behind little evidence of their way of life, but their vibrant folklore and stories resonate throughout the ages to inspire and intrigue people to this very day. Inside this gripping audiobook, you’ll be taken on a journey through time to the legends of the Celtic people, discovering their tales of monsters and heroes in a new light.

From the giants and fairies who inhabit the dark and threatening bronze age forests to the impossible feats committed by legendary heroes, these classic stories delve into the secrets of the druids, shed light on the Gods and Goddesses of early Europe, and explore the colorful and entertaining tales that were told through song and dance around the fire over two thousand years ago.

— The tragic tale of the Children of Lir

— The forbidden romance between Tristan and Iseult

— The Arthurian story of Culhwch and Olwen, and the impossible tasks which rival even Heracles

From tales of secrecy and betrayal to love and passion, these spiritual and mythological retellings are a testament to the rich culture and far-reaching influence of the ancient Celtic people.

Told with gripping detail and reflecting life in early Ireland, Wales, Briton and France, this epic collection seeks to unveil this incredible mythos like never before.

Buy Now to discover the Legendary Myths of the Celts, today.