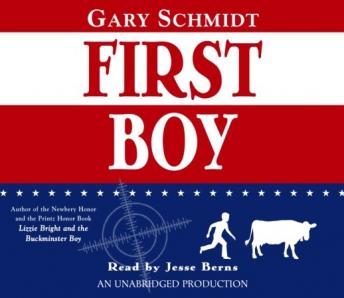 Mr. Heavy Legs walked past Cooper and got into the jeep. He turned on the ignition and backed up to Cooper. He handed him a card with a single phone number on it. “I’m not forcing you to come, kid. Not yet. But things are going to start happening fast. Very fast. Call if you want me. And one thing more: Next time I see you, I won’t be asking you to come.”
“Do you know what happened to my father?”
“Of course I do,” said Mr. Heavy Legs.
Then he drove away.

“You’re my first boy, Cooper, my first boy,” his grandfather tells him just before he dies. Now, fourteen-year-old Cooper Jewett has no one, not even a dog to keep him company. The only thing that keeps him going is looking after the dairy farm.
All of a sudden, strange and inexplicable things begin to happen. Big men in suits with black sedans are all over Cooper’s small New Hampshire town. The President of the United States invites Cooper for a chat at her headquarters. Her opponent insists that Cooper join him on his campaign. Cooper’s house is searched at night, and his barn is burned down. His neighbors, even the sheriff, are behaving strangely. Why?