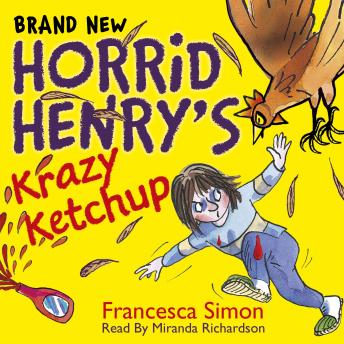 Discover the one thing Horrid Henry is scared of, watch out for the return of Rabid Rebecca, find out what happens when Henry makes a film about his family and lots more in the most hilarious and horrid storybook yet.

Horrid Henry is illustrated by Tony Ross, who also illustrates David Walliams’ children’s books, as well as his own picture books.

Read by Miranda Richardson. Miranda Richardson has appeared in films such as THE HOURS, SLEEPY HOLLOW, THE CRYING GAME, EMPIRE OF THE SUN and HARRY POTTER AND THE GOBLET OF FIRE. TV work includes A DANCE TO THE MUSIC OF TIME, JACKANORY, Queen Elizabeth in BLACKADDER and Queen Mary in THE LOST PRINCE. She has won two Spoken Word awards for her inspired readings of HORRID HENRY AND THE SECRET CLUB and HORRID HENRY’S STINKBOMB audiobooks for Orion.
(P)2004 Orion Publishing Group.Ltd