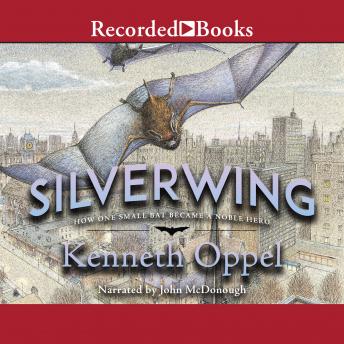 Shade, a young silverwing bat, is the runt of his colony. Determined to show how brave he is, Shade breaks one of the ancient rules that governs the bats. As punishment, owls burn the bats’ roost, forcing them to migrate earlier than normal. While on the trip south to the Hibernaculum, Shade becomes separated from his flock during a rain storm. His destination is millions of wing beats away. Now he must find a way to make the journey on his own. Along the way, he’ll meet up with bats of different species–some friendly, some not. Shade will have to learn quickly which ones to trust if he’s ever going to see his family again. A Smithsonian Notable Book for Children, Silverwing combines action, fantasy and factual information on bats into an unforgettable tale. John McDonough’s soaring narration brings Shade and and his colony to life.