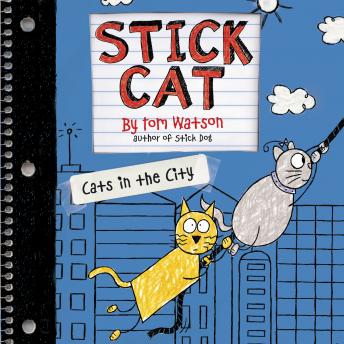 Stick Cat: Cats in the City By Tom Watson Audiobook

Join Stick Cat and his incomparable sidekick Edith on another dangerous, epic, and hilarious rescue mission in Tom Watson’s Stick Cat: Cats in the City!

Stick Cat is going somewhere he’s never been before—his best friend Edith’s apartment. It’s got everything: donut crumbs in the sink, a fire escape, and a window with a great view of the big city.

While admiring the view, Stick Cat sees trouble. Hazel, the bagel maker, is in serious danger in the building across the alley. Stick Cat will use his smarts—and Edith’s appetite—to devise a rescue plan. But can Hazel hang on long enough for this dynamic duo to save her?

Even reluctant readers gobble up the Stick Cat and Stick Dog books!