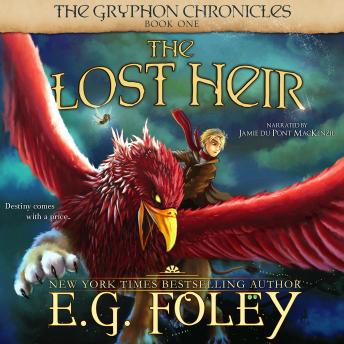 Take a dash of Harry Potter and a splash of Oliver Twist, add a pinch of steampunk and a sprinkle of Victorian fairy lore, and what do you get? The Gryphon Chronicles! A rollicking fantasy adventure series that’s as much fun for grownups as it is for kids.

Jake is a scrappy orphaned pickpocket living by his wits on the streets of Victorian London. Lately he’s started seeing ghosts and discovers he can move solid objects with his mind! He has no idea why. Next thing he knows, a Sinister Gentleman and his minions come hunting him. On the run for his life, Jake is plunged headlong into a mysterious world full of magic and deadly peril. A world that holds the secret to who he really is: the long-lost heir of an aristocratic family—with magical powers!

But with treacherous enemies closing in, it will take all of his wily street instincts and the help of his friends—both human and magical—to solve the mystery of what happened to his parents, and defeat the foes who never wanted the Lost Heir of Griffon to be found…

Praise for THE LOST HEIR

“The Lost Heir is a charming whirlwind of action adventure, romance and faerie, much in the vein of Harry Potter, but with more pace and threat, and a little bit of Oliver Twist thrown in.” ~AudioBooks

“My daughter cannot believe one person made all the voices.” ~Mary Pierce (Audible)

“If you’ve ever been 12, or know someone who is 12, you will enjoy this tale of good vs evil. The story is well-crafted, and the characters are even better. Jamie performs this fine fantasy with a flair and adds depth and voice to the character interpretations in a fully engaged manner.” ~Jan (Audible)

“Storytelling at its best!” ~Amazon Review