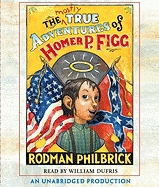 Although he is underage, Homer P.  Figg’s beloved older brother, Harold, is illegally sold into the Union Army by their ruthless guardian. Now Homer must run away from Pine Swamp, Maine, and his wretched home to find his brother and save him from the war, before it’s too late.

In a story filled with adventure, humor, and danger, award-winning novelist Rodman Philbrick tells of the turbulent, passionate times–from rural Maine to the Battle of Gettysburg–in the Civil War. Here is historical fiction at its most engaging, portraying the 1860s through the observant eyes of a backwoods boy who is both courageous and funny–and always willing to stretch the truth to his own advantage. A master of plot twists and vivid characters, Philbrick sweeps readers into the unpredictable events–both colorful and tragic–of this powerful turning point in American history.